Uganda’s dairy sector plays a very important role – both in the economic development and as a source of nutrition in the country. Although the dairy industry has maintained an average positive growth rate of 3 per cent per year, the sector faces various challenges. Through the Pearl Dairy Farmers’ Community (PDFC) initiative, a technical assistance programme was set up for the dairy farming community in the South West Region of Uganda to improve productivity, share best practice and scale-up milk production. Among other things, milk production has increased by nearly 78 per cent per farm on average, thanks to the programme.

Despite its importance, the Uganda’s dairy sector struggles with a number of problems. Only 33 per cent of the country’s milk output is processed, while the remaining 67 per cent is not formally collected and much is lost. Besides the lack of processed milk, the average productivity per cow is low at only around 4 litres per day. According to the FAO (Food and Agriculture Organisation of the United Nations), 95 per cent of the milk production comes from smallholder farmers living in impoverished
rural areas, and 41 per cent of the population is undernourished.​

The Pearl Dairy Farmers’ Community (PDFC) is an initiative led by Pearl Dairy Farms, Ltd. (a leading dairy processor based in Mbarara, Uganda), in collaboration with the IFC (International Finance Corporation), Bles Dairies, VetEffect, SNV (Foundation of Netherlands Volunteers), Tetra Pak, and Tetra Laval Food for Development. The PDFC initiative has been steadily expanding its technical assistance programme to benefit the dairy farming community in the South West Region of Uganda.

Through the programme, the lead farms are continuing to show positive improvements. Overall, milk production shows an average increase of nearly 78 per cent per farm. The increase is due to the technical assistance provided by the project team on proper feed, nutrition and animal husbandry. The project has helped to create 150 new direct jobs and improved the livelihoods of more than 1,000 farmers, and plans to scale-up to benefit 5,000 smallholder farmers.

“We are honoured to have Food for Development’s technical support, offered as practical hands-on training to the dairy farmers. Their vast knowledge in dairy farming is a valuable resource for the farmers,” says Amit Sagar, CEO, Pearl Dairy Farms, Ltd.  ​ 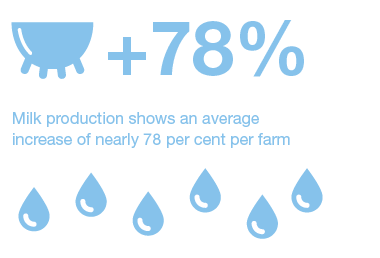 The Tetra Laval Group consists of three industry groups, Tetra Pak, Sidel and DeLaval, all focused on technologies for the efficient production, packaging and distribution of food.